Shopping Cart
Your Cart is Empty
Quantity:
Subtotal
Taxes
Shipping
Total
There was an error with PayPalClick here to try again

Thank you for your business!You should be receiving an order confirmation from Paypal shortly.Exit Shopping Cart

USA Storms Creates Havoc and Death Across the USA - Main Stream Media concentrates on Japan...Donations Needed for YOUR NEIGHBORS!!

OVER 40 PEOPLE DEAD AND BILLIONS IN DAMAGE AS RESULT OF 100s OF TORNADOES SWIPE ACROSS THE SOUTHEASTERN STATES...

(CNN) -- Powerful storms that have ripped across the Southeast killed more than 40 people over the past three days, according to the National Weather Service and reports from several states.

Among the worst hit areas was Bertie County, North Carolina, a rural area in the northeast part of the state. The weather service reported 14 deaths in the county. Zee Lamb, county manager, said there were 11 fatalities.

More than 50 people were taken to hospitals Greenville, and between 50 and 70 homes were destroyed, Lamb said.

The death toll across six states includes another nine in other parts of North Carolina; four in Virginia; seven in Alabama, two in Oklahoma, seven in Arkansas and one in Mississippi.

Virginia Gov. Bob McDonnell declared a state of emergency "to direct all possible resources towards responding to this event."

For North Carolina, "When the storm count is finalized, this will likely be an historic tornado outbreak," said CNN meteorologist Jacqui Jeras. "It is quite unusual to have this many supercell tornadoes of this intensity strike the area."

North Carolina normally gets about 19 tornadoes a year, according to the National Climatic Data Center. There are 90 preliminary reports of tornadoes in the state in the latest storm system. A single tornado often gets multiple reports, so it is not immediately clear how many there were, Jeras explained. "But regardless, this is an epic event."

At Camp Lejeune, according to a news release, an unknown number of base residents suffered injuries and nearly 30 homes were damaged following a series of tornadoes that touched down near a housing area Saturday evening.

One seriously injured child was taken to a nearby hospital, according to the statement.

The storm rendered five homes uninhabitable and prompted officials to set up a temporary shelter at a nearby elementary school, the statement read.

Gov. Bev Perdue declared a state of emergency for the entire state, according to the North Carolina Division of Emergency Management.

The governor said that as of late Saturday, the number of storm-related power outages had dropped from 250,000 to 143,000.

The service said more than 100 twisters have been spotted across the region during the recent storms.

In South Carolina, a tornado cut through Berkeley County, destroying a church and injuring six people, the weather service said.

Meanwhile, emergency crews in Georgia, Mississippi and Alabama worked to assess the damage after the storm system moved north through the Carolinas and up into southern Virginia.

In Virginia, three Gloucester County residents died and 64 suffered injuries from the fast-moving storms Saturday, according to Bob Spieldenner, director of public affairs for the Virginia Department of Emergency Management.

A tornado also ripped the roof off a school in the county, felled trees that blocked multiple roads and severed power lines, leaving 9,300 people without electricity, according to Spieldenner.

In the Shenandoah Valley, in the western part of the state, a child died after being swept away in a flash flood, according to the National Weather Service. Spieldenner said authorities rescued another flood victim, but a third is missing.

The storms were the latest in a round of severe weather that has hit parts of the Midwest and South since Thursday. They left a trail of downed trees and power lines, scattered cars and crushed homes as it moved east.

ATTENTION NEEDS TO BE PLACE FIRST ON OUR OWN NEIGHBORS THAT ARE IN NEED OF HELP AND ASSISTANCE, FEMA AND RED CROSS FOR A FEW DAYS WHILE THE CAMERAS ARE ROLLING ARE NOT ENOUGH. GO TO OUR DONATION PAGES AND HELP YOUR NEIGHBORS FIRST. 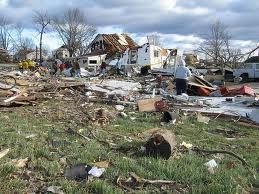 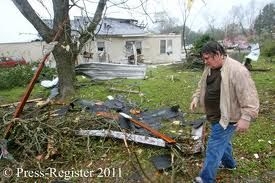